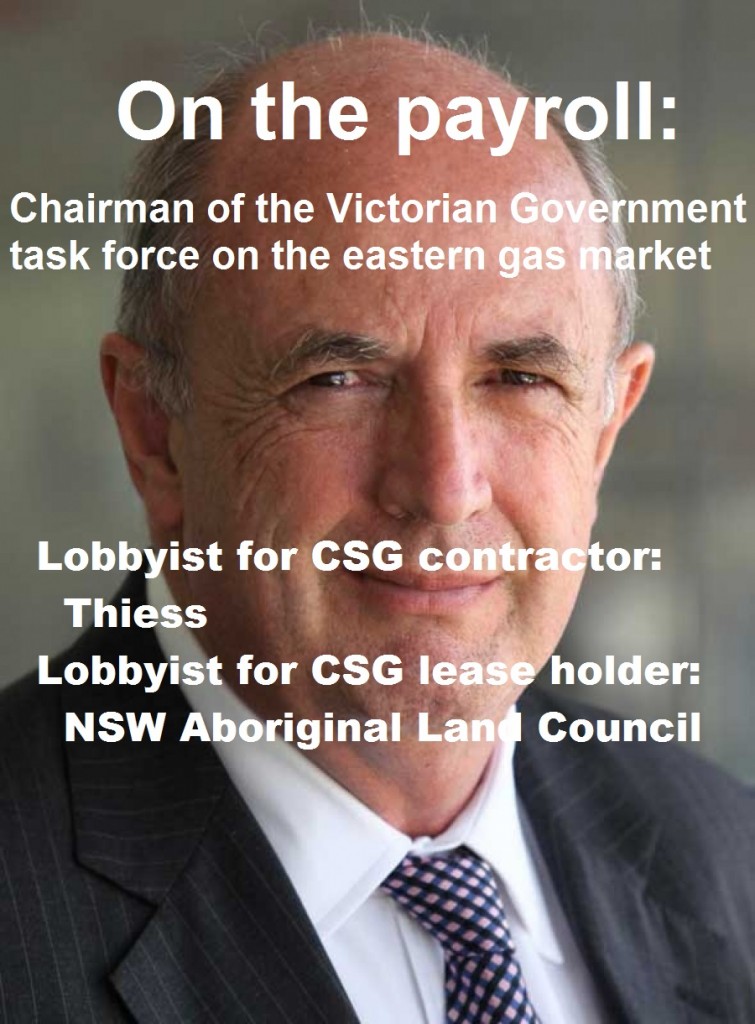 It was interesting to see the opinion piece written by Peter Reith for The Drum – Fracking scare campaigns threaten our prosperity – especially considering Reith is a paid political lobbyist and chairman of the Victorian Government’s task force on the eastern gas market.

“The public debate is soon mired in myriad false claims, partly because government has not ensured the public is fairly informed and because some activists have other political agendas,” writes Reith.

To ensure that the public is fairly informed, and agendas and vested interests are properly tabled, it should be noted that Peter Reith is a lobbyist for First State Advisors and Consultants Pty Ltd.

Who does First State Advisers lobby for?

Thiess has won a $1.8 billion contract from CSG producer QGC for the construction of gas compression facilities in Queensland’s Surat Basin.

Another of Reith’s lobbying clients, the NSW Aboriginal Land Council has applied to explore for coal seam gas beneath 40 per cent of the state, sparking outrage from indigenous and non-indigenous people alike.

There has been considerable debate on the exposure by ICAC this week of the alleged vested interests of Messrs. Mooney and Grayson in their manipulation of the Great Barrier Reef Marine Park Authority and their financial ties to the coal industry.

Peter Reith is paid to lobby government by a major fracking contractor and a major mining lease explorer. Reith is also paid by the Victorian Government to advise them on fracking. It would seem that potential conflicts of interest are not limited to the coal industry.

Reith goes on: “There is virtually no country in the world that bans fracking because there is no reason to do so.”

A global list of bans on fracking is updated here.

“The most immediate issue is that in the early years from 2014, the Queensland LNG export plants may not be able to acquire sufficient natural gas from their new gas fields and, in that case, they will source gas from sources otherwise slated for domestic use, thereby pushing up the price,” writes Reith.

Gittins writes: “The gas industry is working a scam on the people of NSW, in collusion with other business lobby groups and federal and state politicians. It’s trying to frighten us into agreeing to remove restrictions on the exploitation of coal seam gas deposits. Failing that, the various parties want to be able to lay the blame for an inevitable jump in the price of natural gas on the greenies and farmers.”

If anything, Reith’s argument demonstrates the very real need for Australia, and for each state, to develop a Gas Reservation Policy to ensure domestic supply.

Major gas users, such as the plastics, chemicals and steel industries have all called for a Gas Reservation Policy to keep prices stable and ensure supply.

Not surprisingly, the gas industry opposes such a policy because they want to control the market, set the price, decide who they sell to and, most importantly, set the quota for gas extraction.

Reith claims ‘fracking was invented in the late 1940s’.

This too is a con, as the statement is usually accompanied by the assertion that fracking has occurred for decades without incident.

The truth is that in 1997 the acknowledged ‘father of fracking’, George Mitchell, developed the hydraulic fracturing technique known as ‘slickwater fracturing’, which involves adding chemicals to water to increase fluid flow, thus making shale gas extraction economical. That is the fracking technique now used – it is only 15 years old and has not been tested on the scale currently being rolled out worldwide.

Even the Father of Fracking expressed major concerns about his process later in his life: “As a concerned businessman and philanthropist, I have come to understand that the natural gas industry can no longer simply focus on the benefits of shale gas while failing to address its challenges. We know that there are significant impacts on air quality, water consumption, water contamination, and local communities.”

Reith ends his opinion piece with this observation: “Queensland has worked through the same issues as Victoria and New South Wales. Rather than turning a blind eye to the possibilities of natural gas, the southern states would do well to learn from Queensland’s mistakes and look carefully at the success they are now enjoying.”

Farmers who allow coal seam gas onto their land are forced to sign a confidentiality clause forbidding them from speaking out against the horror stories in Queensland. It is unfortunate that government and the coal seam gas industry is turning a ‘blind eye’ to those people who are living with the problems caused by coal seam gas.