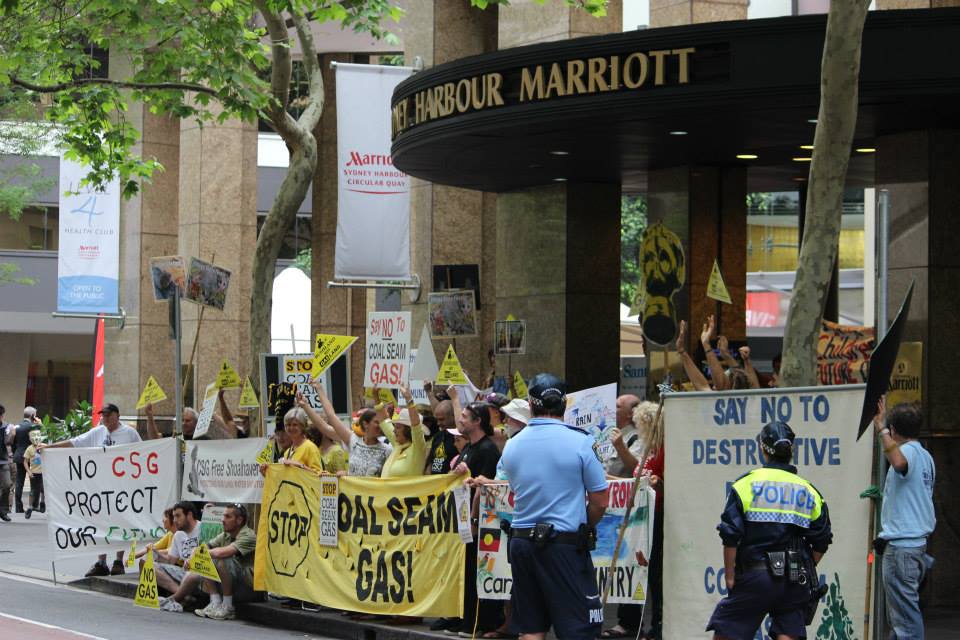 Over a hundred people from a wide range of community groups across Sydney and NSW voiced their concerns about the coal seam gas industry outside the East Coast Gas Outlook Conference  in Sydney last week.

Government and industry were at the 22 October conference to discuss ways for agriculture and CSG to co-exist, and to outline the progress in NSW of coal seam gas licensing and regulation.

The Marriot Hotel street-front was crowded with people who had travelled from all over NSW, including Lismore, Gosford, Illawarra, Shoalhaven, Byron Bay and Western Sydney to demonstrate their concerns about the expanding coal seam gas industry.

The event featured live music by Luke Wilton, Ecopella, Jacinta Tobin and Chandika. There were a range of speakers, including Aboriginal representatives from across NSW, and spokespeople from several community and environmental groups concerned about the spread of the unconventional gas industry across Australia.

As an administrator of CSG Free Western Sydney, I addressed the crowd.

“It is not acceptable when mining and gas companies, assisted by our own government, are able to drill and mine across our precious water resources, food producing areas and communities.

“It is not acceptable when our water can be contaminated by a cocktail of mining chemicals for monetary gain while ignoring the science and the impacts.

“It is not acceptable when these companies railroad communities that don’t have the legal right to say ‘no’.”

I also read a statement from Debbi Orr, a resident of Tara, Queensland, an area which is not only surrounded by coal seam gas mining, but has also been heavily impacted by it.

“Since CSG invaded our area, all of my six children have become sick,” said Debbi.

“Headaches, nosebleeds, burning itchy eyes are a regular – sometimes daily – occurrence in our house. The nearest gas well to our home is about one kilometre away.

“I know of at least 26 other families who are experiencing the same thing, and the distance from gas wells and other infrastructure varies.

“I am seeing teenage children cutting themselves because they cannot handle the headaches and nosebleeds anymore. Lifeline is now involved with most of these families.

“If you think your Government will protect you and put safeguards in place to protect you, think again!

“We were fool enough to think the government would protect us! They didn’t. The government is only interested in protecting CSG companies. They are aware of the health impacts and still do nothing to protect us.

“Queensland Health’s … investigation recommended air monitoring amongst other things and yet here we are seven months after the report was released and still none of their recommendations have been implemented.”

“The government’s claim that NSW is set to run out of gas has been strongly disputed by gas companies and scientists, who have dismissed the crisis as a furphy,” she said.

“I’m concerned by the scientific data arising from overseas where unconventional gas has been in full production and the drilling and fracking procedure has shown to be fraught with danger.

“We will not sit back and let the government and the mining companies trash this state like they have in Queensland.”

The event was organised to raise awareness about the risks facing communities through the spread of the rapidly expanding unconventional gas industry.

Our government has plans to drill 50,000 wells across Australia in the next 15 years. Mining in our drinking water catchments is still not off limits. This puts the water supply for 4.5 million people under threat of contamination from a dangerous cocktail of mining chemicals.

One protestor said: “If we don’t all stand up now to stop the madness of fracking and coal seam gas mining, our clean uncontaminated water supply will be just a story our children tell their grandchildren about.”

The concern is that government and industry are underestimating the significance of the recharge areas of the Great Artesian Basin, such as the Pilliga forest.

The recent introduction of a two kilometre buffer zone around residential areas has lulled Australians into a false sense of security that our communities are now safe from coal seam gas mining near our homes. This couldn’t be further from the truth.

The Abbot Government is, as we speak, pushing for changes to the land uses bill which will create a loop hole in legislation so that coal seam gas mining can go ahead in any area, as long as there is a resource to be exploited.

The health of all Australians is being put on the line for monetary gain – for profits, and big business, ahead of people.