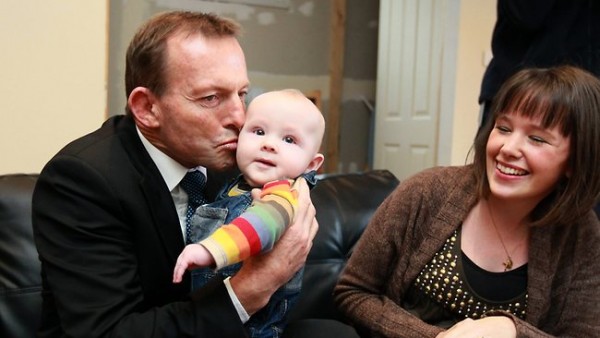 Actually, first of all I’m confused about why it’s called ‘parental’ leave, when according to the Liberal Party’s website it applies only to mothers?

Oh yes, a second aside, I’ve called it the ‘Coalition’s’ policy, even though technically it’s a Liberal Party policy, because of all that blather that came from them about the ‘illegitimacy’ of the 43rd parliament on the basis of its negotiated power sharing status between legitimately elected parties and independent representatives – the Liberal/National party coalition is, as far as I can ascertain, the longest standing, most powerful negotiated power sharing alliance in Australian politics.

And this paid parental leave scheme is going to be an inter and intra headache for this alliance – unless it turns out to be the undoing of Tony Abbott’s prime ministerial ambitions all together, in which case it will be a headache only for Tony Abbott.

Technically, these are asides from my main point – in reality, they are key to the story.

And the story is about getting real, about being brave enough and willing enough to peer through the smoke and mirrors of the Australian political landscape and have a good long look at what’s reeeeeeally going on – and our collective part in it.

The Coalition’s Paid Parental Leave policy is about to pay selected women $75,000 to have a baby. Pause and reflect on that thought. Yes it will pay other women as well, those who earn less will be paid less.

That doesn’t change the reality that some women will be paid $75,000 to have a baby – by the same people who are about to universally remove the school kids’ bonus.

Why? So she doesn’t lose her place in a highly competitive job market, thus feeding the myth that women can ‘have it all’.

Has anyone else noticed that every single policy and/or issue we are discussing and/or fighting over in this election is measured against the values of white male privilege?

And if you are a white male of privilege reading this, if I was a betting woman I’d lay my fortune on the fact you rolled your eyes just then.

This is not a new conversation, in fact it’s an exceedingly tiresome one.

For the reality is that everyone in this society who is not white, male and materially very comfortable (yes, yes, you work hard for it) is an outsider. The reality is we are knocking on the doors of the castle asking for admittance to an inner sanctum that we are never, ever going to access by right. I’m sorry, one by one doesn’t count. And the reality is we are bleating for ‘more’ when more is never enough.

All these years after the revolution – yes, it was a revolution, for in my lifetime it was legal for a bank manager not to lend a woman money without her husband’s permission, it was legal to exclude a woman from university, it was legal to rape your wife and no-one ever, ever spoke about the sexual use (these days we call it abuse) of children – all these years after the revolution so that we the outsiders might be admitted to the castle, we are still on the outside hammering on the door.

After all these years, the best we can do is make rules to ensure the elite play nice – those would be our world-leading equal opportunity laws and affirmative action policies that attempt to ensure quotas of women in the castle and occasionally apply to people of indigenous or migrant heritage.

Yet still we are on the outside.

I was listening to one of those Sydney shock jocks the other day. Actually, I wasn’t listening, I just happened to walk by a radio tuned to the diatribe.

It stopped me in my tracks – as I tried to imagine anyone, any single human being in this country, who was not white, male and privileged blasting the airwaves with such vitriol.

Imagine a woman speaking like that to an audience that can be measured in six or seven digits, speaking about men the way those men spoke about our former prime minister – and being paid several million dollars a year for the privilege.

Imagine anyone at all who is not of the white, male privileged class having free-range, right-of-expression access to those audiences in return for exceedingly immoderate remuneration.

The idea keeps playing in my head – $75,000 to have a baby. I reflect on the financial realities of the time I raised my own children. We were a single income household and that income was ‘the pension’, the basic support the Australian nation offered women raising children alone. 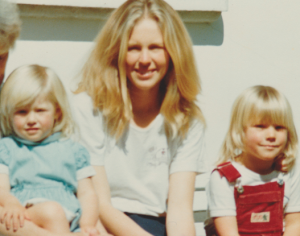 Healthy and happy – the 1980s five cents between paydays family.

Every fortnight, every single fortnight between paydays, we had five cents to our name. That’s right, five cents. It’s an horrific thought to early 21st century families, right?

Let’s put that in perspective. The pension paid us enough to pay rent on a cheap house, eat well, run a cheap car and participate selectively in community events. Sometimes we even bought new clothes.

And between paydays we had five cents to our name.

Here’s the clincher – we had no debt.

Imagine that for a moment. No debt. We didn’t spend our days pining for what we didn’t have and we had no debt. There was no such thing as a credit card. And we owed no person or institution any money.

I would take that five cents between paydays any day before the burden of household debt we’ve created to purchase modern lifestyles we cannot afford.

And those lifestyles, the ones that no matter how much we earn in reality we can’t afford, perhaps, are one very big reason underpinning the argument about why we are even considering paying $75,000 to a woman who wants to have a baby.

That and the fear that if we don’t, she’ll lose her seat in the inner sanctum of the castle.