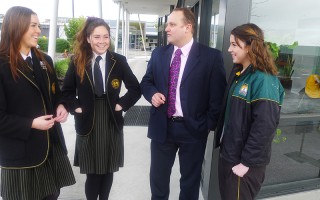 By Jenny Bates in Lalor and Michelle Slater in La Trobe

Liberal candidate for  the marginal outer-Melbourne seat of La Trobe Jason Wood has declined to attend a public meet-the-candidates forum about education, saying he does not want to attend a single-issue forum.

The forum, to be held on Thursday at Emerald Secondary College, will focus on education issues in the marginal seat. Labor MP Laura Smythe’s office organised the event.

In an email obtained by No Fibs, Mr Wood told Ms Smythe’s office: “I will not be attending the forum. When the election is called, we will have a debate on all issues.”

Mr Wood told No Fibs, “I will not attend a debate on one issue. I want one on all issues.

“He said it would be full of education unionists,” Mr Kennedy said. “He is the red-hot favourite to win the seat and doesn’t give a damn about talking about education.”

Mr Wood said: “There’s no use going to a forum arranged by the Labor Party. I don’t want to go to a forum that’s been arranged by a union or a political opponent.”

He said he would be attending a forum organised by the Australian Christian Lobby  http://www.australiavotes.org/forums_and_electorates/ on September 3 as it was an independent group.

“There we will get to debate on different issues,” he said.

“The Australian Christian Lobby doesn’t share all of my views and I don’t share all of their views. But at least they put on a good forum. All of the candidates will turn up to that.”

Mr Wood said he was a strong supporter of education in La Trobe and had pushed funding for a $2 million performing arts centre at Emerald Secondary College in 2004.

“My goal is to improve services for young people in the local area.”

Meanwhile, in Julia Gillard’s former stronghold of Lalor in Melbourne’s west, all was quiet until the September 7 election date was loudly bellowed from every known news source.

The two major parties then stepped up and started swinging, and their swinging styles proved to be as different as western Sydney is from Toorak.

Joanne Ryan, the ALP candidate, featured on the cover of the local Wyndham Weekly, with another photo and a double-page Q & A inside.  She was asked the obvious question: whether the Labor Party had made the right choice replacing Julia Gillard with Kevin Rudd.

In true politician’s speak, she avoided a yes or no, focusing on the party’s future and saying her endorsement as a local proved the ALP respected grassroots politics.

There was no other mention of Kevin Rudd, as Ms Ryan paraded her credentials as a born and bred Lalorite with a keen sense of community and a belief in the importance of education.

The Liberal-National coalition’s first move to promote its candidate was, in my opinion, quite a sneaky one. I received in my letterbox an official -looking envelope with a forceful declaration of “IMPORTANT Postal vote information”. I was quite surprised to extract an A4 page entitled Tony Abbott MHR Leader of the Liberal Party.

The letter said they had a detailed and fully costed plan and listed five points that to me, as a resident of Lalor, did not address any local issues. The second-last paragraph mentioned the local candidate, Nihal Samara. The letter was signed by Tony Abbott, with a small photo of Mr Samara in the bottom right corner. The envelope also included a postal vote application form.

I have not yet sighted anything from the other candidates. Hopefully they, as well as the Labor and LNP candidates will start addressing local issues, such as public transport and infrastructure shortages resulting from the too-rapid growth in the region’s population. 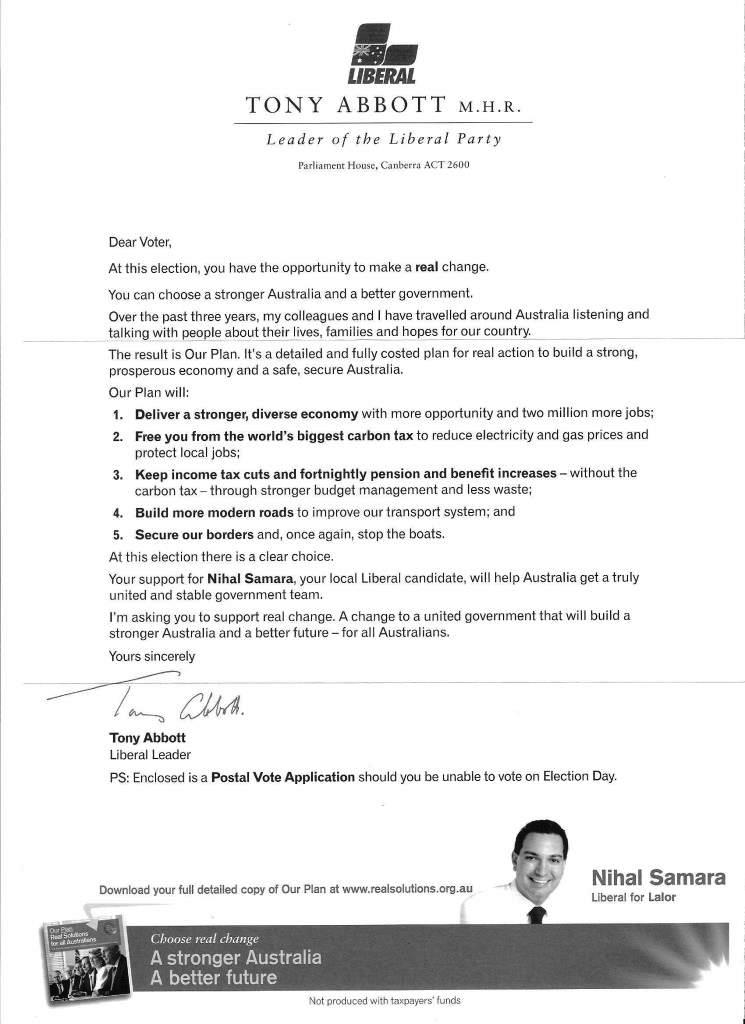