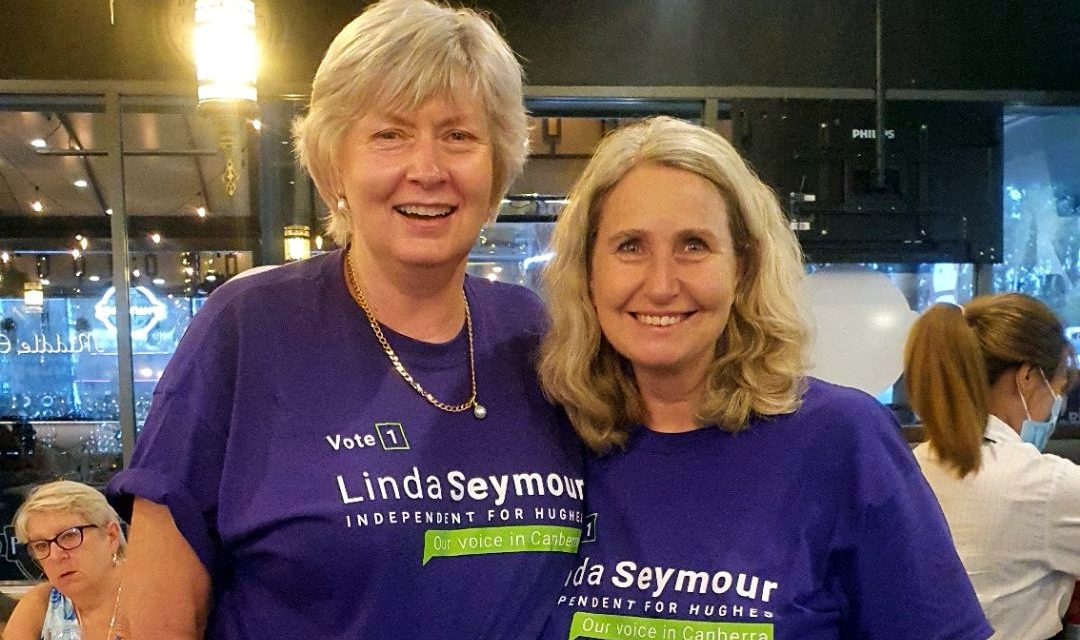 Daisy is a third-year student journalist studying communication and creative intelligence and innovation at the University of Technology Sydney. Daisy has a passion for using multimedia to create stories about ordinary people doing extraordinary things.

OVER COFFEE AND Vegemite toast at a local cafe, it’s clear that independent candidate for Hughes Linda Seymour (pictured, right) is ready to jump into campaign mode. Hughes resident Helma Mulhall and I have joined Linda to hear about her next steps.

In July 2021, the grassroots community group We Are Hughes – founded by Linda – began a process of finding a community-endorsed independent candidate to represent Hughes at the next federal election. On November 14, 2021, Linda was announced as that selected candidate.

“With We Are Hughes we have been a concept and we haven’t had an election date. Now we’ve got a candidate, me,” Linda says.

She tells us she sees the importance of continuing the values established by We Are Hughes throughout her campaign, keeping community conversations at the forefront.

“It is about being able to have those conversations without making it a party policy position where you just have to attack… we want to continue having that conversation,” she says.

At this point of the conversation, Jannali resident and We Are Hughes volunteer Helma asks Linda an important question: “So you will have your own views but will you take expert opinion and listen to what people in the community want?”

Linda responds by saying she understands the importance of consulting others.

“That’s a no-brainer, you have to listen to lived experience,” she says.

“You just need to hear. I love it, it is great to listen to people’s stories. The idea that you are fixed in your opinion is ridiculous. As far as representation goes, if I came in with a fixed set of views, I wouldn’t even vote for me. You actually have to be able to be flexible.”

Since her announcement as a candidate, Linda has continued engaging with her community, wearing her “Vote 1 Linda Seymour” shirt to raise awareness of her position as a community independent; although she’s realised there is confusion surrounding voting and preferences.

“Somebody asked me on Sunday: ‘If you lose, where will your preferences go?’. I was like: ‘What do you mean?’,” Linda tells us.

“I guess because I’ve always known [about preferential voting], I didn’t realise. I absolutely took for granted that people understood.”

It becomes clear that Helma and I are confused about voting preferences. This brings up an important realisation: how are we supposed to make sure our vote counts if we don’t fully understand how to vote?

According to Linda, the key is not relying on a How To Vote card.

“That is only a suggestion… the How To Vote card is just a guide,” she says. “I am not going to direct preferences at all.”

Helma laughs, and says: “I think we might have to go to university and do a year in politics!”

This simple conversation between Linda, Helma and I encapsulates why Linda believes it is so important to continue community engagement throughout her campaign.

She wants to use her platform to ensure her community understands their choices when it comes to voting.

“I really need to make the community aware of what the difference is between an independent and a party politician; what that means, what the benefits are, because people are so used to party politics,” she says.

“People make their own decision on preferences and that is really important.”

Linda welcomes everyone to have a conversation of their own with her at her upcoming events.