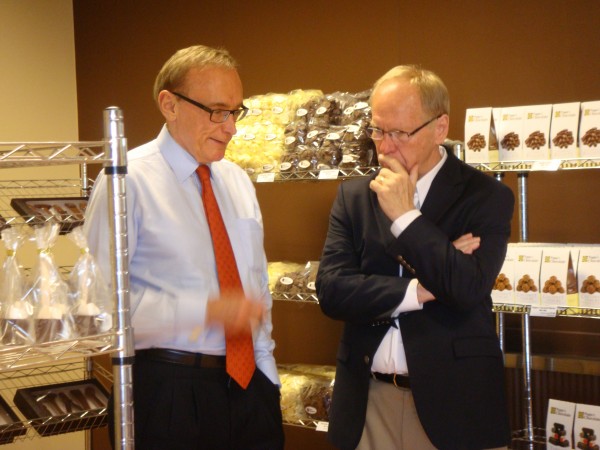 Now what on earth is the Australian foreign minister doing in a chocolate shop in Beenleigh?

Not even his adviser could tell me, fresh off the bus for the convergence of two former state premiers on her third flying electorate visit in one day.

Foreign Minister Bob Carr spent morning teatime in the seat of Moreton, lunchtime in Rankin and afternoon teatime in a shop called Poppy’s Chocolates in Forde.

The adviser said the visit to Beenleigh had something to do with the Commonwealth Games.

I pushed harder, not enjoying her discomfort as she rifled through her notes for a reason.

“Perhaps it’s about how to maximise promotional opportunities for small business when the Games come to the Gold Coast?” I suggested, kindly helping her out, unkindly exposing her confusion.

I’m reminded of my days on The Northern Star, the regional newspaper on the far north coast of NSW. I remember Carr coming to town, the carefully staged shot beneath the lighthouse in Byron Bay, the national media dominating the question-time scrum with no interest from them or the premier in local issues.

And I recall telling my editor we shouldn’t report these visits if the good folk of Canberra can’t make time for local press. After all, why come all this way if they’re only going to speak on national and international issues to people who work along the corridor?

Standing at the back of the pack in Beenleigh, that’s not really a problem. Regional media have been swallowed up by their metropolitan parents and/or hobbled by severe editorial cuts. The question-time competition for the former premier of NSW and former premier of Queensland was minimal – a local paper, a metro paper and a TV camera.

The reality is, like the foreign minister said, the people of Forde really are fortunate to have someone of Beattie’s experience willing to advocate for them in the federal parliament.

The question is – at 60-40 in polls that are not going his way and an election atmosphere that looks more like a slow-motion ping pong match than a feisty showdown – can he convince the local electorate that he is worthy of that chance?

Like Carr didn’t say: I’m the foreign minister, and I’m here to help.