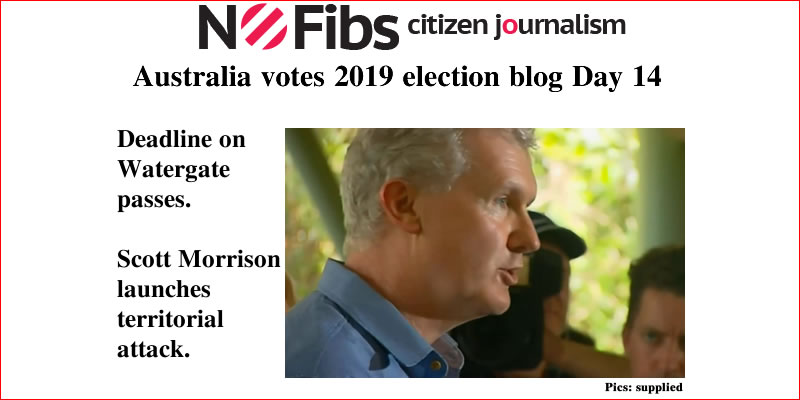 The conspiracy theory over BoM data rides into another day

Margo Kingston has spoken with Mackellar Independent candidate Alice Thompson. It’s that electorate next to Tony Abbott and was held by Bronwyn Bishop from 1994 up until the Choppergate scandal. The incumbent is Jason Falinski. Alice Thompson calls for greater transparency in parliament.

Shadow Environment Minister Tony Burke told Patricia Karvelas last night on ABC Radio National that the Agriculture Department had advised him they would not be commenting any further on the Watergate saga. Other, than their statement last week, they would not release any more detail on the transaction. Shadow Environment Minister Tony Burke rules out Murray Darling Basin Royal Commission on RN Drive – Separate stories podcast.

Mr Burke said Labor wanted to focus an inquiry directly on the $80 million transaction because it had not received a competitive tender. He added that the government’s Auditor-General review would not have the coercive powers to be able to answer all of the questions over the deal. However, Ms Karvelas put it to him that without a transparent and wide-ranging inquiry into the Murray-Darling Basin, the targeting of Barnaby Joyce would look politically motivated.

Mr Burke replied that it was because there was “a transaction that did not make sense” and there were no other current issues under any other water ministers. Further on the wider Murray-Darling governance, he said any issues would be handed to a National Integrity Commission, once it was established, should Labor form a government.

Also last night,The Project aired a summary of the Watergate story so far.

NoFibs editor Margo Kingston also noticed herself and Michael West had been spotted by The Australian.

Anne Davies has taken a critical look at the claims made during the Watergate scandal. How accurate is the prime minister’s defence of purchases made when Barnaby Joyce was minister?

The conspiracy theory over BoM data rides into another day

Whilst crediting the bureau for its work, Mr McCormack explained how the temperature at Wagga Wagga had been previously taken at the post office but was now taken at the airport.

Mr Rennick also made headlines today when it was revealed the donation he made to the LNP before being selected for the senate spot. Dan Conifer reported, “Controversial election candidate Gerard Rennick donated more than $30,000 to the Liberal National Party in the year before he secured a winnable spot on its Senate ticket.” Senate candidate Gerard Rennick donated $30k to LNP ahead of preselection.

Prime Minister Scott Morrison landed in the Northern Territory and launched an attack on the government of Michael Gunner. He labelled it the “worst in the country” and asserted that Labor was always inferior to the Coalition when it comes to the economy.

Tim Lester asked the PM that, given it was a long-held position by politicians that voters were smart enough not to confuse state and federal issues, was Mr Morrison now asking voters to make a federal judgement on a territory government?

In contrast, Mr Morrison likened himself to Victorian Labor Premier Daniel Andrews during a 2018 question time.