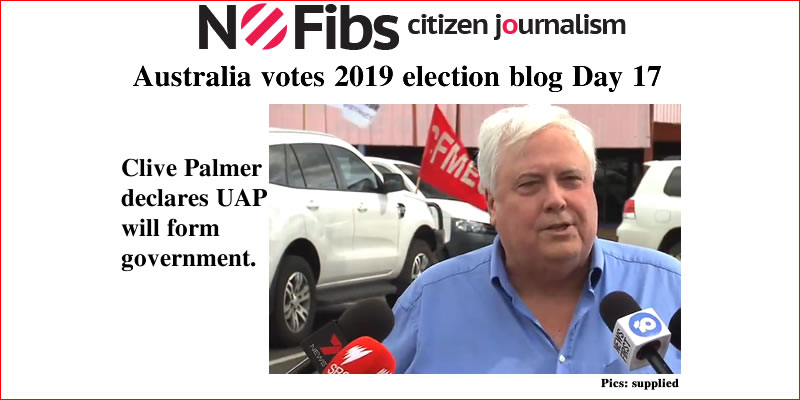 Clive Palmer has been labelled an “anathema” and a “tosser” by Labor’s Anthony Albanese in a fiery, five-minute appeal to voters not to choose the Coalition for their first preference after a deal was made to swap preferences with the United Australia Party (UAP).

Mr Albanese said if the Coalition was returned to government it would do deals with Pauline Hanson’s One Nation party and Mr Palmer’s UAP and it would be “a recipe for chaos”.

Mr Palmer was today at Clermont in central Queensland to rally pro-Adani groups who were awaiting the arrival of anti-Adani protesters led by Bob Brown. He said the region wasn’t completely reliant on Adani’s planned Carmichael coal mine and there plenty of other projects that would lead to prosperity.

At a later press conference, Mr Palmer declared that UAP would win government and the preference deal wouldn’t matter because none of them would be distributed. He also revealed he had spent $50 million on advertising in the campaign to date.

Mr Palmer declared that the outstanding entitlements to Queensland Nickel workers were being taken care of and money had been deposited into a trust account.

Rashida Yosufzai reported, “They’ve all been repaid of course by the federal government,” Mr Palmer said when asked about the payments. “And we’ve paid seven million to (the) trust account of a solicitor to do a top up so that’s all been done.” Clive Palmer says he’s spent $50 million on election ads.

Mr Palmer also claimed he had been approached to do a Labor preference deal by Queensland Senator Anthony Chisholm.

A lot of claims have been made and will continue to be made about who is responsible for the Carmichael coal mine having not broken ground yet. Queensland Liberal National Party (LNP) Senator Matthew Canavan today pointed the finger at the Queensland Labor government.

“Approve the Adani mine now,” he demanded.

However, it’s not as straightforward as Senator Canavan implies. The excitement over the project has been welling for just over eight years. Coal tenements in the Galilee Basin for 7.8 billion tonnes were first purchased by Adani in 2010 from Linc Energy (now defunct).

The Wangan and Jagalingou (W&J) people are the traditional owners of the land. Over time, two groups emerged, one for the mine and another against. One of the key Queensland government actions that would have to occur is the extinguishing of Native Title. However, the state government has confirmed it will await the Federal Court proceedings by the anti-Adani W&J group before that occurs. A hearing is set down for next month.

ABC journalist, Josh Robertson, has been reporting on the mine for many years. He’s recently compiled a good summary on the status of the outstanding environmental and legal requirements before Adani can break ground. What we know about Adani’s Carmichael coal mine project.

Guardian journalist, Ben Smee, has also written a good summation of the status of the Carmichael project. Adani’s Carmichael coalmine: what happens next?

Of the three major parties, the Greens want the mine stopped and the LNP wants it to go ahead. As the Construction, Forestry, Maritime, Mining and Energy Union (CFMEU) supports the mine, it leaves the Labor Party and in particular, Queensland Premier Annastacia Palaszczuk, to walk the tightrope in the middle.