#AusVotes Day 27 – Not back in black yet: @qldaah #qldpol 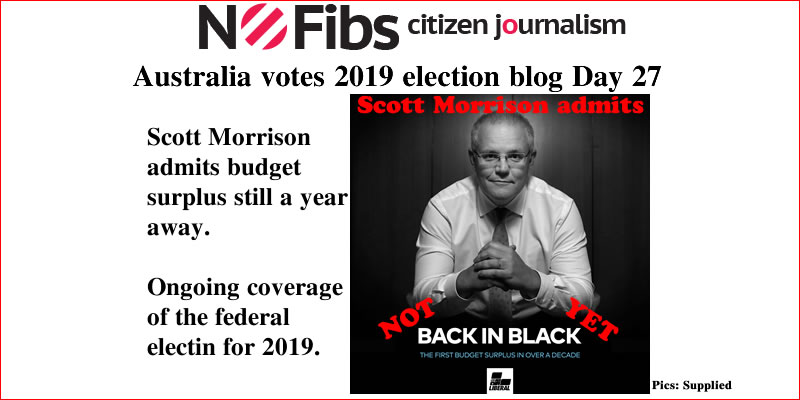 Climate policy doubts over the Liberal Party candidate for Indi

UN extinction report but where is the environment minister?

Warringah through the lens of Kate Zarifeh

The egging of Scott Morrison

Scott Morrison admits budget not back in the black yet

Climate policy doubts over the Liberal Party candidate for Indi

Wayne Jansson reported, “Indi Liberal Party candidate Steve Martin’s belief in the science behind human-induced climate change is in serious doubt after giving a series of conflicting answers to questions on the issue as the federal election approaches.” Lib Indi candidate in deep climate change conflict.

UN extinction report but where is the environment minister?

A United Nations (UN) report into human population and its impact on the natural world had the media asking Prime Minister Scott Morrison asking where his environment minister, Melissa Price, was today.

Mr Morrison told reporters that he assumed Ms Price was over in Western Australia campaigning and that it was one of the biggest electorates in the country. Pressed further, he told the pack to contact her office directly and that he was sure she would release a statement in due course.

Not long after, a Tweet with a link to the Liberal Party website was posted by the minister.

Warringah through the lens of Kate Zarifeh

Kate Zarifeh is a photographer on Sydney’s northern beaches. She’s been viewing the Warringah election campaign through her lens. Zooming in on Zali Steggall.

The High Court has dismissed a challenge by Clive Palmer to the Australian Electoral Commision (AEC) to prevent preference results from being published before all booths across Australia are closed. The move would have meant a result on election night may not have been known until after 9:30pm when booths in the Cocos Islands had closed. The High Court is yet to release its reasons.

The egging of Scott Morrison

Prime Minister Scott Morrison has pointed the finger at activists who invade farms and militant unionists after a lady was knocked to the ground after an egging attack. The incident occurred at the Country Women’s Association (CWA) in Albury where the PM was attending a function.

Margaret Baxter, the CWA lady knocked down in the scuffle, says she is fine. She did not see the egger at the time. She was bowled over by a cameraman whom she saw ‘start to wobble’.

Opposition leader Bill Shorten appalling and disgraceful behaviour and said both Mrs Baxter and Mr Morrison had his sympathy. On the linking by the PM on the egging to militant unionists, Mr Shorten would not be drawn except to say he understood it was ‘a very upsetting experience’ and he was not going to judge.

Albury police would not be drawn any further except to say a female was in custody in relation to an incident involving the prime minister this morning.

It was pointed out to Mr Morrison that a vegan activist was hardly likely to come at him with an egg. The PM acknowledged this but plunged into his existing pledge to get tough on activists who trespass on farms.

Scott Morrison admits budget not back in the black yet

In contrast to his ‘back in black’ slogan, Scott Morrison has come clean that the federal budget is projected to be in surplus in the 2019-20 financial year.

Katharine Murphy reported, “Scott Morrison has acknowledged that the budget is currently in deficit despite the “back in black” marketing of the April economic statement, and has declared he will have the upper hand in policy development, not the roiling factions of the Liberal party, if the Coalition is re-elected on 18 May.” Morrison acknowledges budget is still in deficit despite ‘back in black’ pitch.