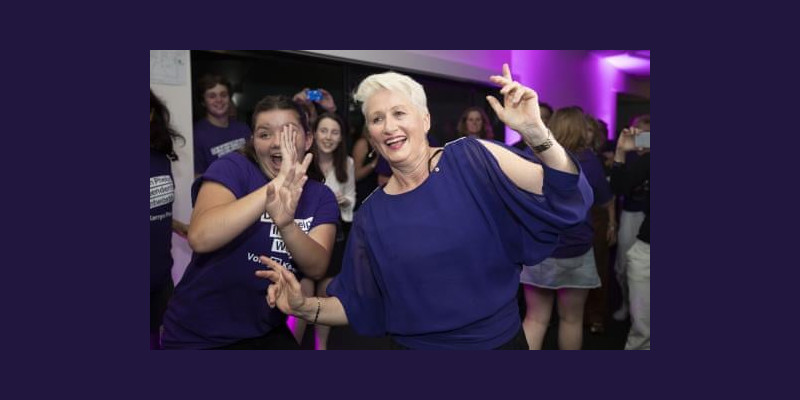 The way I see it, every safe Coalition seat must be in play in the sense that quality indies ask tough questions incumbents are forced to answer. That requires courageous indies & committed, creative citizens because a weakened local media can’t do it. Ready to play? #ausvotes

Hi. I’ve been musing since the Wentworth by-election about what, if anything, I’d like to do during the federal election, and after chatting with some @NoFibs stalwarts — @geeksrulz, @jansant, @burgewords, @qldaah and @adropex — this weekend I’ve got the vibe.

I worked full-time on Twitter for Wentworth, helping to establish Twitter’s news feed with #WentworthVotes, tweeting takes on national news with local implications and, to the cost of my mental health and the patience of many followers, urging progressive blue, red and green voters to join together for the common purpose of beating the Liberals and electing small-l liberal Independent Kerryn Phelps, the only realistic alternative. The strategic voting education campaign paid off — despite Kerryn’s rookie preferencing errors at the start of her campaign, blue, red and green voters gave her enough first preferences to come a commanding second, and preferenced her big time when they gave their first preferences to others. (See Tweet Victory in Wentworth for more background).

When I went to Kerryn’s election night party, I learned two big things. First, the room was filled with people who had never been involved in an election campaign, most of whom had been lifelong Liberal voters. I realised that something potentially big was happening.

Second, more than one volunteer said they had joined Twitter to follow my account for instant information on national news and to read my arguments to red and green progressives who’d written Kerryn off after her preferences debacle. My feed had become a grassroots resource!

Soon after, I learned another big thing. I’d argued in my Sydney Morning Herald post urging liberals to vote for Kerryn in this blue-ribbon seat, Australia’s richest, because they needed to take a stand against a party that had moved hard right, deserting its small-l liberal base. Kerryn’s big three policy issues, which got their first decent run in the national political conversation for a long time, were climate change, asylum seekers and a federal ICAC (Independent Commission Against Corruption). A shock loss for the Libs would force a reassessment, I wrote.

I was wrong. The government doubled down on all three issues after losing Wentworth, and again after its landslide loss at the Victorian election.

I think blue, red and green progressives would agree that Neanderthal Libs and Nats have held back Australia for a long time. Malcolm Turnbull’s political career tells the story. He lost the job of Liberal leader in 2009 after working hard to forge a compromise ETS (Emissions Trading Scheme) with the Rudd Government — a policy advocated by John Howard himself at the 2007 election. Abbott then cynically crushed an extraordinary ETS compromise forged by the minority Labor government with regional Independents and the Greens, abolishing the sensible, market-based energy and climate change policy when he won office in 2013. Five years later, a resurgent hard-right minority ruined Turnbull’s patient attempts — backed by core Coalition supporters the Business Council of Australia (BCA) and the National Farmers’ Federation (NFF) — to forge a bottom-line energy and climate change policy, in the process ejecting him from the leadership. Only the intervention of the now sad small-l liberal faction stopped the elevation of hard-right darling Peter Dutton to the prime ministership.

We are left with a hard right-controlled government decrying any attempt to move towards a carbon-neutral energy policy and having nothing to say on reducing income inequality, expanding opportunity for the middle and working class or addressing climate change. Instead, it’s lots of jobs for the (nearly all male) mates, constant attempts to prop up banks, and financial advisers skimming unearned profits from us mugs and giving the distinct appearance of outsourcing government functions to donor mates. It is now wholly self-serving, bereft of policy or principle.

It’s clear the Coalition will run a very dirty, negative campaign in marginal seats. But voters need to do more than elect a Labor government, they also need to put the frighteners on Libs and Nats in safe seats where traditionally there’s been no focus on or real conversation and debate to FORCE both parties to reform and decide to serve THE PEOPLE.

There needs to be two fronts at the election — the marginal seats fight, where the big players fight it out, and the safe Liberal and National Party seats, where quality Independents seek to form preference-educated coalitions of voters usually at odds, to insist that climate change, energy policy and honest politics be discussed and debated.

In that sense, it doesn’t matter if quality climate change and honest politics-focused Indies do or don’t stand a good chance of toppling the incumbents. The idea is to get the policy conversation going and, through grassroots action, force the candidates to be accountable for what they’ve chosen to stand for or accept. A political revolution, if you will :)

Therefore, No Fibs will focus on these contests, which straddle seats from safe blue-ribbon Liberal seats in the capital cities, to safe rural National Party seats. To me, if Australia re-elects and elects quality Independents in what looks like, at the moment, a new Labor government, ideally including regionals and rural areas, quality centrist indies all over Australia will be able to engage and understand each other’s circumstances and needs.

And if, God help us, a Coalition government is re-elected, I want these Indies to have the balance of power, leading the way to an evidence-based, civil, honest, public interest-focused atmosphere in the Parliament.

What No Fibs can offer

I’m going to the NSW mid-North Coast seat of Cowper after the budget, to document Rob Oakeshott’s campaign to beat the Nat in this retiree-rich seat. How it will work I don’t know, but I’m thinking of tweeting my days and blogging each night, plus a regular podcast if I can find someone to produce it, interviewing Independents around the country and local volunteers. The hashtag to use is #CowperVotes.

Michael Burge has returned to his home turf in New England and has already started writing on the campaign. He’ll assist volunteer writers/Tweeters in the seat to report the attempt by Tony Windsor-backed Indie Adam Blakester (@adamblakester) to oust the appalling, short-termist Barnaby Joyce. Joyce was recently fingered as triggering the collapse of live animal exports by wrecking decent oversight of the industry, betraying the Murray Darling, also as Agriculture Minister, and denying climate change to the extent of urging the government to dump Turnbull’s plan for a new Snowy River hydro project to fund a new coal-fired power station. Participants there should use the #NewEnglandVotes hashtag.

Wayne Jansson, who so brilliantly reported for No Fibs and Twitter the extraordinary Cathy McGowan campaign to oust Sophie Mirabella in Indi in 2013, will report #IndiVotes in Indi again where Helen Haines (@helenhaines1) seeks to succeed Cathy as the independent member, which would be the first successful handover of power from one indie to another in our history.

He also wants to keep an eye on #MalleeVotes, where independents are seeking to shake up the ultra-safe rural National Party seat of Mallee.

Folks, quality people who believe in SERVICE to voters, not their personal advancement, keep emerging in the regions. Meet @MalleeRay, a climate change focused indie having a go at beating Nats (post sugar baby Broad) at #MalleeVotes

I figure #WentworthVotes and #WarringahVotes will gets tons of coverage, but if voters in those seats want to focus on one of them in their Twitter feeds and report for us, excellent. I’d LOVE someone to focus on #MayoVotes, where early dirty tricks show the Libs will do ANYTHING to beat Rebecca Sharkie (@makemayomatter).

After I started tweeting my ideas this weekend, Alice Thompson (@indy_Ally) a former Turnbull staffer who stood aside as a #WarringahVotes indie when Zali Steggall (@zalisteggall) put up her hand and coalesced community group support across blue, red and green voters, contacted me and has offered a post on her long-shot bid for the safe liberal seat of #MackellarVotes.

I expect more Indies to emerge soon. No Fibs and I can support them. Anyone got eligible Indies to tell us about?

When I went to Indi late last year to support Voices for Indi candidates at the Victorian state election, I noted that the main paper, the Border Mail, had gone behind a paywall. The main New England paper, the Northern Daily Leader has recently done the same. That means we need grassroots voices to keep interested voters in those seats informed (by the way, this model is misconceived in my opinion — better to have open coverage, and offer specials benefits for subscribers — exclusive right to comment, special events with reporters and interesting people in the area, and Q and A’s on Facebook).

In 2013, I tweeted all the candidates in Indi seeking consensus on a hashtag. We agreed on #IndiVotes, and throughout the campaign interested Tweeps got a lively, comprehensive news feed that, together with No Fibs coverage, kept them informed on an increasingly exciting campaign uncovered by the mainstream media (MSM) until late in the last week. That helped Cathy fundraise when Sophie got the big bucks to blanket TV, and made viral Sophie’s attempt to blanket all polling booths with negative attack posters in the dead of night via a Tweep’s photo. PLEASE urge all candidates in all seats you’re interested in to follow this Twitter protocol!

As my long time followers know, I’ve urged media for 20 years to embed reporters in crucial seats and report outside in, to no avail. In 2013, with financial help from Macquarie University, No Fibs published on-the-ground reports from voters in seats across Australia, leading to our comprehensive cover of Indi, perhaps the proudest achievement of my career.

This time, I’m hoping that by the end of #ausvotes we’ll have a record on ways for Indies and their grassroots supporters to force real debate and real engagement in safe Coalition seats. What works, what goes wrong, what lights a fire and what doesn’t. I’m working on some private funding, otherwise I’ll ask for expenses support; and I’m looking for retired sub-editors to help us out with publishing posts.

To my followers: Please spread the word that Twitter can cover seats that would otherwise be ignored, nationally. #(Nameofseat)votes is a standard hashtag that can help coalesce interested citizens in each seat, bring them together and spread the word to interested voters outside those seats. Wouldn’t it be great if a reliable, fact-based Tweep emerged in these seats to dedicate their feed to the action and maybe write a regular post for No Fibs on what’s happening on the ground?

So, that’s the plan. Volunteers and helpers welcome.